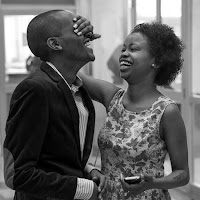 Monday, October 7, 2019 - Former radio presenter, Tina Kaggia, has responded to her ex-husband, JB Masanduku, after he said that she has refused to co-parent with him.

Masanduku spoke in a recent interview and claimed that Tina has denied him the right to see the two children they sired during their marriage.

The comedian pleaded with the former radio presenter to have a meeting where they will discuss how they can co-parent despite breaking up.

“Tina first and foremost I hope you are well and doing fine.”

“I beseech you that we have a sit down and we talk about how I would probably see the kids” Masanduku said on live TV.

However, Tina says that she has no time to engage her ex-husband.

She further stated that public opinions don’t move her.

“The sooner bloggers and for F.O.M.O (Fear of Missing Out) people understand this, the sooner they will stop calling me with useless questions.”

“Sina time ya kujibu,” she posted on her Instagram stories.

Tina has in the past described her ex-husband as a dead beat dad and a serial womanizer.

The two got married in 2014 but their marriage flopped3 years later.

Tina said that the marriage failed to work because her ex-husband neglected her and lied to her often.