Wednesday, October 30, 2019-Celebrated journalist, Hussein Mohammed, brought curtains down on his decade-long stint at Citizen TV when he delivered his final bulletin on Tuesday night.

His colleagues at the SK Macharia owned media house surprised him with a cake and gifts live on TV.

And before he cut the ceremonial cake, he took a moment to pay tribute to his sexy wife Malyun in his parting shot.

The TV presenter has maintained a low profile and little is known about him beyond the TV screen.

Actually, many do not know that he is married since 2014.

He got married to his wife Malyun at the Masjid Nur in South C in a traditional Islamic ceremony.

“It has been an amazing journey, 10 years and you the viewers have made it all worth it.

“You all [colleagues] have made it worth it, including my guests.

“I appreciate the support and guidance of RMS Chair S.K. Macharia and Vice Chair Gathoni Macharia, the managing director Wachira Waruru, the management, the Lands Cabinet Secretary Farida Karoney who was our boss here a while back.

“And, of course, my family. Always. Especially my dear wife who has been my support system all through,” 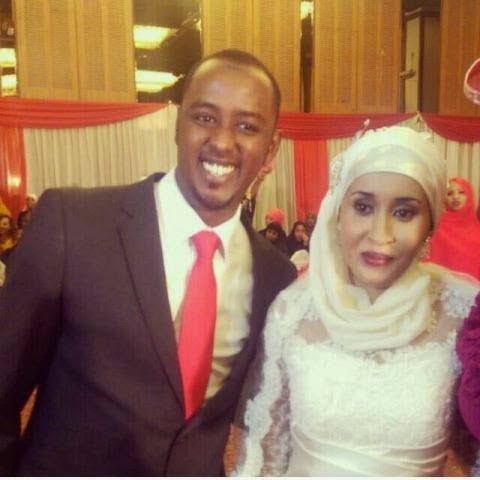 Despite being tight lipped on his next port of call, Mohamed speculation is rife that he could be headed to the Qatar-based Al Jazeera.

“In my line of work you rarely say you are resigning or quitting. That’s why I say tonight, I’m taking a break, I’ll see you around. Thanks for watching,” he said.