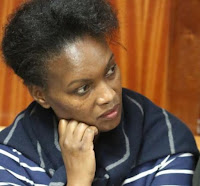 In an application filed by her lawyer, Philip Murgor, Wairimu who is accused of killing her husband, Tob Cohen, wants Kinoti and National Media journalist, John Kamau, and Star reporter, Juma Victor, jailed for six months for contempt of court.

The order, which was issued on September 16th, barred parties in the case and the press from publishing details touching on investigations into Cohen’s death.

She said despite the order, Kinoti “prosecuted” the case against her on the media after finding Cohen’s body at his Kitisuru home on September 13th.

She said Kinoti wrongly depicted her as a cold-hearted murderer, and the DCI boss didn’t have any evidence linking her to the businessman’s death.

On the two journalists, Wairimu said they continued to write articles despite a court order barring them.

Ms Wairimu was charged with murder on October 4th and has since been released on a Sh2 million cash bail.

She is accused of killing her husband, Tob Cohen, on July 19th and later dumping his body in a septic tank in their Kitisuru home.