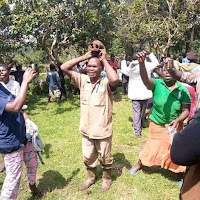 Over 1,500 Luhyas in Nandi County were rendered homeless early this week after they were ordered out of their land following a court ruling that declared them encroachers.

"I don't want to mince my words on this, I want to tell the Deputy President you are not welcome in our area if our people are being evicted from Nandi," Malala said.

Nandi Governor Stephen Sang however disputed claims that those affected were illegally thrown out, arguing that the owner of the land sad implementing a court order.

ODM Director of Communications Philip Etale confirmed that a host of Luhya leaders travelled to Nandi on Friday but they were due to address the media.

"A group of Legislators from Western Kenya together with the ODM Party Secretary General, Edwin Sifuna, have landed at the village where hundreds of families were forcefully evicted on Wednesday in Chesumei Constituency of Nandi County. They will address the media from the ground," he said.