Drama as RUTO’s ally, AISHA JUMWA, is arrested at night and taken to an undisclosed location after killing RAILA's man! Not even the DP can help her now-She may never get out 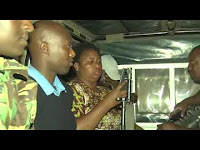 Wednesday October 16, 2019-There was drama on the eve of Wednesday when police raided the home of Malindi MP Aisha Jumwa in Kakuyuni and arrested her after a scuffle ensued between her and ODM supporters in Ganda Ward, Kilifi County on Tuesday.

Jumwa’s arrest comes after a death was reported at an ODM event she allegedly disrupted.

Jumwa took to social media at 3am to announce her detention she is being held at Kilindini Police Station in Mombasa.

"Currently, I have been arrested at my residence in Kakuyuni and I am being taken to an unknown destination," Jumwa tweeted.

"We don't know how the deceased died or who killed him. Reports claim that it was my bodyguard or the police or anonymous people like Agunga. We want justice for Ganda residents," Jumwa spoke.

A correspondent from the region confirmed the deceased as Gumbao Jola, an uncle to Reuben Katana, ODM's candidate for the Ganda Ward by-election scheduled for October 17.

The meeting had been convened for ODM agents to strategise on how they would conduct the mini-poll.

After the chaotic scenes, the rebel ODM MP called for a press conference to speak out and distance herself from the incident.