0 Editor's Choice, Forum and discussion, Lifestyle 01:37
A+ A-
Print Email 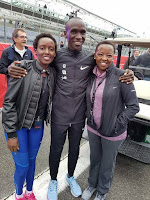 Eliud, who is the world’s greatest marathon runner, is attempting to become the first man to run a marathon in under two hours.

Speaking at Malinya grounds in Kakamega yesterday, DP Ruto said he would not be able to attend the burial of former Senator Boni Khalwale’s first wife, Adelaide, on Saturday as he will be in Austria on an official capacity.

“I would have wished, a lot, to be here on Saturday. However, accept my apologies as I will not be able to come because, as you know, Kenya is a sports nation. Because of that, we have one of us who will be going to make history by becoming the first man to run a marathon in under two hours,” Ruto said.

On her part, DP Ruto’s wife, Mama Rachel Ruto, took to twitter to announce she will be in Vienna.

“Just like We did in 2017 in Monza, Italy, when he broke the world record running the marathon in 2:00:25*, We will be there once again in Vienna, Austria, cheering him on as the greatest marathoner of all time.”

Speaking ahead of the challenge, an upbeat Kipchoge said: "The course is extremely good - I feel more prepared and I am confident,"

"It's not about thinking, 'Am I going to do it?' - I have tried it the first time and the second time, I will do it."


The Ineos 1:59 challenge race is slated for Saturday October 12 at 12 pm Kenyan time.