DCI detectives arrest a man who killed JANE MURUGI, sister to Githunguri MP GABRIEL KAGO – You won’t believe how he killed her 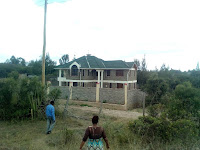 Friday October 4, 2019 - Detectives from the Directorate of Criminal Investigations (DCI) have arrested the main suspect in the murder of Githunguri MP, Gabriel Kago’s sister, Jane Murugi.

Stephen Ndoro, a Medical Doctor based in Makueni County, was arrested on Friday after Ms Murugi was found dead in her matrimonial home in Membley, Ruiru, Kiambu County.

A senior DCI detective said that they arrested Ndoro after they suspected foul play in Ms Murugi’s death.

Murugi was found dead in a toilet with a scarf hanging around her neck.

“A scarf tied to a necktie was found hanging from the toilet window,” said Ruiru OCPD, Mutwiri Ringera.

But Ndoro, who is the husband, told detectives that he woke up at 5.am and didn’t find his wife in bed only to find her dead in the toilet.

Murugi is said to have been on maternity leave at the time of the incident.

She leaves behind a two month old baby.

Ndoro is being detained at Ruiru Police Station awaiting to be charged with murder on Monday.