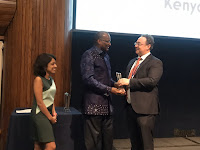 Tuesday, October 22, 2019 - Dr. Patrick Njoroge has been named the best Central Bank Governor of the year in Sub-Saharan Africa by Global Markets Magazine.

The Central Bank of Kenya (CBK) boss has been recognized for improving oversight in the banking sector and for leading the country in a successful demonetization of the old 1000 notes without causing instability in the country.

“Dr Njoroge has presided over a period of consolidation within the Kenya banking sector that has helped clean up the country’s banks vastly improving oversight over the sector.”

“Under the Governors tenure the improvements in the banking sector are helping the expansion of Kenya’s domestic capital market,” wrote Global Markets Magazine.

This is the second time Dr Njoroge is receiving the award, with the first time being in 2016 when he was recognized for his role in curbing inflation.

In his acceptance speech, Njoroge dedicated the award to the youth of Africa that need more openings for growth.

“I would, therefore, want to dedicate this award to the youth of Africa who obviously need a lot more opportunities and which our actions collectively will provide for their benefits,” said Njoroge.

President Uhuru nominated Dr Njoroge to be the Governor of the Central Bank of Kenya on June 2, 2015.

He assumed office on 18th June 2015 after vetting by the Parliamentary Committee on Finance, Trade and Planning, replacing Prof Njuguna Ndung’u as the 9th Central Bank of Kenya Governor. 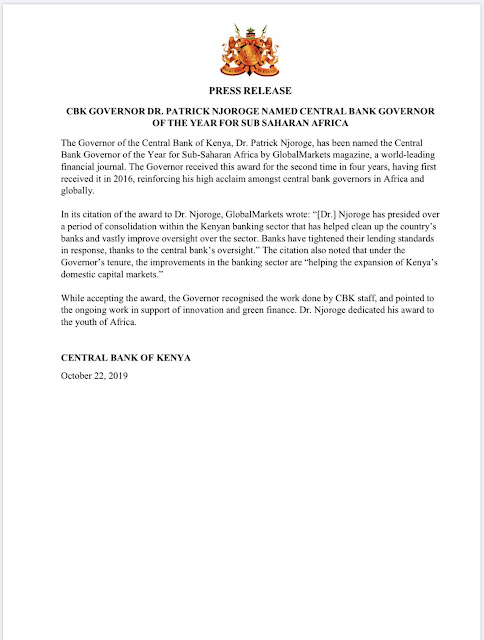