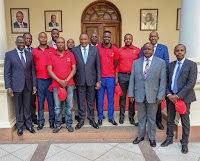 Speaking on Tuesday, Wamuchomba described Mariga as a foreigner who has been spending his time in and out of the country, arguing that he knows nothing about the plight of Kibra people.

She further argued that the former footballer has no development record, another reason why he is not the right man to pick in the much-awaited November 7 mini poll.

"Mariga is a foreigner, he is in and out of the country. Show us at least one thing he has done for Kibra people," she said on Citizen TV's Daybreak show on Tuesday morning.

On her hand, nominated Senator Sylvia Kasanga opined that Mariga might find it difficult triumphing in the constituency.

This, she noted, is based on the fact that the region is considered an Orange Democratic Movement (ODM) stronghold.

"Kibra is an ODM dominated area," she said.