As long as school principals keep demonizing boys, girls will continue getting fucked by Pastors and Sponsors 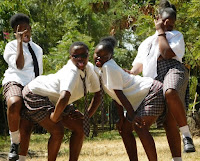 The 8-4-4 social-experiment which was conceptualized by among others, Githeri clergy Archbishop Ndingi mwana Nzeki, continues to wreak havoc in our society. In his mind, the Kamba idiot wanted everyone to be a priest so that we can live bored and lonely lives like he does (or did).

The moment you lock girls in a secluded environment with the hormones bursting with rage, and you combine that with tainting their minds with a lot of negativity against boys, telling them that boys are evil or dangerous (as if getting pregnant is a crime against humanity), you leave a huge vacuum which must be filled.

And nature abhors a vacuum.

So parents and teachers conspire to brainwash girl’s minds against boys. Parents warn their daughters against having boyfriends. You bar social-interaction during holidays as you force your kids to do homework. The only male she interacts with are her teachers and clergy. What do you expect you dumb faggets?

Parents should encourage both their sons and daughters to show them their boyfriends. Whether in primary or high-school, your kid should master the art of interacting with her peers. They should develop the attraction of people in her age group.

But when you spend all your days demonizing boys, what do you expect? These girls will start developing love and affection for old Men, under the pretext of “respect” .

I believe because of this structural weakness, over 70% of girls in primary and high-school have had sexual relations with either an uncle, a priest or just some random old man. Could even be her friend’s dad. But because parents are so “busy” (watching EPL and attending church), they are only concerned with their children’s academic reports (based on a flawed, dysfunctional 8-4-4 curriculum) as opposed to overall well-being of their children.

Let’s ask all girls one simple question. How many of you have ever been greeted by an old man, who then uses his middle finder to scratch the palm of your hand? The answer would be an overwhelming majority have encountered that sleezy “handshake” .

That’s how old men are able to sleep with daughters of their friends and family members. That handshake is mostly done by old perverted men, and really leaves ladies confused and mentally unstable, especially when done by people with close proximity.

I know Pastor Ken Gomeri’s victims are largely pretending to not have slept with him, but that’s a big lie. High-school train students to be subservient to religion. Infact schools mete punishment to those who refuse to attend church. So it goes without saying that any “authority” who presents himself to students in such a setting, automatically achieves god-like adoration. In this state of fear, a girl can submit and virtually do whatever the bogus priest wants.

The solution to all this is first and foremost, removing religion from the educational curriculum. Secondly, Sundays in high-schools should not be about church. They should be for interaction with schools of the opposite gender. To create a hormonal balance for kids. If you don’t allow that, then you’ll only be encouraging your girls to sleep with their pastors, teachers and lesbianism.

Every weekend should be a time for kids to interact. The culture of a brother-sister school should be encouraged with weekly interactions.

Religious degenerates like Catholic Priests, Nuns, Githeri clergy and the likes, should not be allowed to teach or manage any educational institution in the country. Their toxic and retarded activities should be restricted to their areas of worship. I cringe everytime I hear that a Catholic priest like Father Wamugunda is a lecturer in our universities, institutions which are supposed to be the bastion of freedoms and openness.

We have a society where there’s unprecedented sexual access for old men to young girls. There is a reason this is happening and it begins at our homes and schools.

Parents have allowed themselves to be manipulated by the borderline dumb teachers who are confused on whether they want to be preachers or teachers. Male teachers especially have enjoyed this state of affairs and exploit it to have sex with their sexually-starved students, who are tooled to love old men right from high-school level.

Once again I repeat, parents should allow their daughters to have one boyfriend.

Interactions should be under supervision. Allow them to come to your houses for lunch or dinner. Don’t castigate your daughters too much, forcing them to read all the time. This 8-4-4 is a shit curriculum which only drills and has no long-term value when you over indulge in it. Some of us even went for holiday tuition just so that teachers can make an extra coin. Where did all that learning take us? Has any Kenyan invented something spectacular? No way.

8-4-4 was conceptualized by retarded religious leaders so that it can turn the population into zombies who tithe to enrich clergy. And as it stands, we need harsh penalties imposed on churches so that they can pay taxes like betting companies.

Explain to me, how does Mamlaka Hill Chapel buy off a joint called Heri Square? Has church become an economic activity? How many people does that fuckin church employ? Any skilled personel? How much tax do they pay as opposed to the bar?

No Kenyans, we’ve allowed these shit churches to thrive for so long. And at the expense of the overall health of the economy. Now these dumb religious leaders have started inputting their stupidity in policy. We see politicians mingling wining and dining with Githeri clergy.

This cannot and should not be allowed to continue.

For starters, churches should hand over all schools to the Government. Never again should they be allowed to spread the strain of anti-intellectualism as they feed our children with lies and restrictions so as to conform with some fictional thing called the Bible. Children should be allowed to pursue science and other studies which will have an impact on society.

Churches are behind the societal-rot in the country due to the counter-results of their restrictive teachings. Bishop Owuor, hutishi mtu. Pay your bots to malign Njoki Chege and spread fear, but only the poor and mentally challenged people can listen to you. Cardinal John Njue, kissing the Kenyatta family’s ass even as they screw the economy shows us that church and state is an unholy matrimony.