See who killed MSANDO, CHEPCHUMBA, JACOB JUMA, MERCY KEINO and TOM MBOYA – WILLIAM RUTO is a man of God and he is innocent!!

Friday September 27, 2019 - Self-proclaimed National Resistance Movement (NRM) general, Miguna Miguna, has once again ignited the assassinations debate in Kenya by tabling a list of casualties who have been assassinated by senior people in Government including President Uhuru Kenyatta.

In a postt on Friday, Miguna, who is in exile in Canada, revisited the 2017 murder of former IEBC ICT manager, Chris Musando, claiming that he was assassinated by President Uhuru Kenyatta.

On the murder of former University of Nairobi law student, Mercy Keino, Miguna said she was killed by former Kiambu Governor, William Kabogo.

See more posts from the General 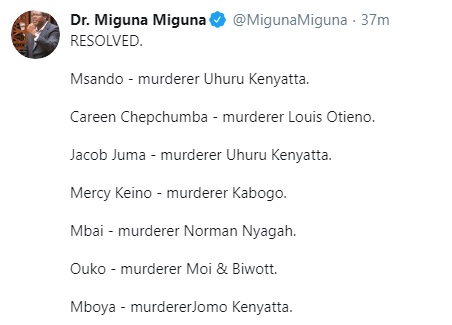