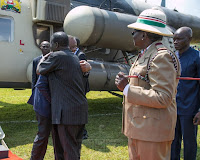 Thursday September 12, 2019-People illegally residing in the Mau water complex have been warned against any attempts to play games about their moving out of the forest.

According to Narok Senator Ledama Ole Kina, the government is very sincere in its push to rid the forest of all destructive elements threatening its continued existence.

Speaking on Wednesday, he said that President Uhuru Kenyatta has demonstrated his seriousness in the campaign, and appears ready to deal with anyone standing in the way.

But he also indicated that the same government also includes ODM leader Raila Odinga, suggesting that the two are for the evictions.

"This government, the government of Uhuru and Raila is not joking, let the police move people out though a huge number have already voluntarily left," he said.

However, the Raila part my land the former PM in trouble, considering that he is not new to attempts to kick people out of the forest.

Raila made an attempt to kick Mau squatters out of the forest during his Prime Ministerial tenure between 2008 and 2013, an attempt that cost him dearly.

Ledama challenged the government to extend the same to all the water catchment forests in the country, to ensure that water supply remains intact in Kenya.

"I would even ask the president to extend it to all our catchment areas," he added.