RUTO winning big in Kibra as RAILA is forced to refund millions to ODM aspirants after it emerged that party officials colluded to rig in KEN OKOTH’s brother, IMRAN 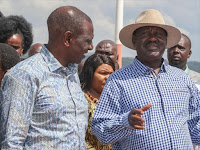 Tuesday September 17, 2019-Former Prime Minister, Raila Odinga, was forced to return millions that his party, ODM, acquired from aspirants after an alleged bungling of the Kibra primaries.

According to reports, Raila handed Ksh2.25 million to the aspirants who lost to Imran Okoth. Each of the aspirants was refunded Ksh 250,000 nomination fee they had parted with.

This comes even as furious Raila pressed top party officials to explain mistakes in the party voters' register that marred the exercise, during a heated meeting on Tuesday last week.

The former prime minister is reported to have called for a closed-door meeting at Orange House, where he expressed his anger with the officials, who he said, could soon be kicked out to rid the party of rogue officials.

IEBC already cleared Deputy President William Ruto’s candidate, McDonald Mariga, who is looking to give Raila and ODM a run for their money in the upcoming Kibra by-election.