RUTO accuses Cherangany MP, JOSHUA KUTUNY, of labelling UHURU a tribalist who exclusively protects the interests of members of his KIKUYU community 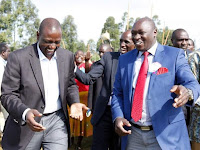 Wednesday September 4, 2019 - Deputy President William Ruto has responded to Cherangany MP, Joshua Kutuny, who accused him of ignoring the interests of Rift Valley people despite the huge following he enjoys in the area.

“If the Mau issue is not handled properly, it is going to tear Jubilee apart.”

“We have seen President Uhuru Kenyatta waking up in the morning to solve coffee issues, but we have never seen the deputy president waking up to solve the issues in Mau," Kutuny said.

But Ruto, through his aide, Emmanuel Talam, accused Kutuny of disrespecting the President, arguing that the remarks portray the Head of State as a tribalist.

"It is sickening to watch Hon Kutuny claim that President Kenyatta is serving the interests of a certain region and community and wants the DP to do the same.”

“You are doing him a disservice," Talam stated.