Red Alert: AL-SHABAAB send tough warning to UHURU, KDF and Kenya in general-See what the militants’ commander has vowed to do over disputed waters 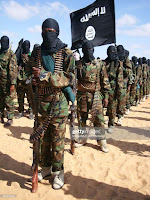 In an audio released on Thursday, Al-Shabaab leader Ahmed Umar, who is also responsible for the deadly attack that left 27 people dead in Kismayo, warned President Uhuru Kenyatta and Kenya to keep off the disputed territory or else they will regret.

Mr Umar, whose whereabouts still remain unknown, accused Kenya of forceful occupation, adding that the anticipated ruling by International Court of Justice will not change the group's decision.

"Al-Shabaab has released a new audio message from its leader Ahmed Umar Abu Ubaidah; the audio appears to be very recent. In the 20:39 minute long audio, Abu Ubaidah refers to the July attacks by the group in Kismayo and the explosion at Mogadishu Mayor’s office," VOA journalist Harun Maruf said.

"Alshabaab leader Ahmed Abu Ubaidah accuses Kenya of "attempting to occupy" Somali waters, saying the group will not accept a verdict by ICJ over the maritime dispute. In an audio released on Thursday, Ubaidah made references to the Mayor Office and Kismayo hotel attacks," Somalia's Radio Dalsan confirmed.

Kenya and Somalia are rocked in an Indian Ocean maritime border row, which is currently under the ICJ.

The court will listen to submissions from both sides in November.

Nairobi had moved to the African Union with a proposal asking the body to intervene and prevail upon Somalia to withdraw the case.

However, AU ruled out the move in early September.

“...the principal judicial organ of the United Nations, will hold public hearings in the case concerning Maritime Delimitation in the Indian Ocean (Somalia vs Kenya), from Monday 4 to Friday 8 November 2019 at the Peace Palace in The Hague, the seat of the Court.”

Early this month, the Court had agreed to reschedule the sessions after Kenya asked for time to recruit a new legal defence team.