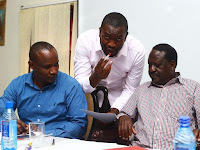 According to impeccable sources, on Tuesday last week  , Raila Odinga confronted his officials in a closed door meeting where he took issue with the case of missing names in the in the voter registrar.

Raila accused the officials of doctoring the registrar to manipulate the outcome of the nominations, threatening to have the sacked in a looming restructuring.

Raila Odinga also demanded an explanation from ODM Secretary General, Edwin Sifuna over allegations that he received bribe of Sh 2 million from Imran Okoth to rig him in during the nominations.

Others were National Elections Board boss Judy Pareno, with sources indicating that Sifuna admitted receiving bribe.