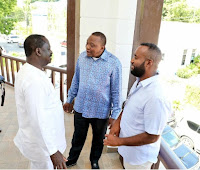 Monday September 30, 2019 - A vocal former Presidential candidate has called for punitive measures against Deputy President William Ruto over his attacks on the Building Bridges Initiative (BBI).

On Sunday, Ruto, who was speaking in Vihiga County, said BBI will flop like the Punguza Mzigo Initiative because it failed to involve ordinary Kenyans.

He called on the President to emulate his predecessors, Daniel Moi and Mwai Kibaki, who stood their ground and punished their deputies at such times.

“The DP is getting bolder and bolder with these attacks on BBI.”

“When Raila and team ganged up against Kibaki, he had to take control of his government by firing them all.”

“HE Uhuru, what history are you reading?" Dida asked.