Here is why TOB COHEN’s sister, GABRIELLE STRATEN, could not attend his funeral - Many Kenyans never knew this despite being Jesus Christ’s followers 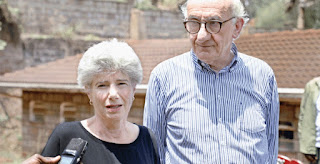 Gabrielle, who jetted in the country, last month after her brother went missing, left Kenya on Saturday and she was set to miss her brother’s burial at the Jewish Cemetery.

However, according to Gabrielle’s lawyer, her departure was normal and planned.

Her lawyers led by Cliff Ombeta said Ms Gabrielle was not scheduled to attend the funeral at the Jewish cemetery, Wangari Mathai Road, Nairobi.

He said Jewish rites don’t allow women to attend such a ceremony.

“She was not to attend the burial because Jewish rites don’t allow women to be present.”

Meanwhile, Tob Cohen’s burial ceremony was postponed to Tuesday after a quorum hitch.

The burial ceremony did not raise the ten men as required by Jewish rites.

Wairimu was among family members who were at the ceremony on Monday when the announcement of the postponement was made.

This was after a court allowed her to be present and pay her last respects to her husband.

Tob Cohen disappeared on July 19th and his body was found inside a septic tank in his Kitisuru home42 days later.

Cohen’s widow, Sarah, is the prime suspect in the gruesome murder.