Has RAILA abandoned his BBI in support of EKURU AUKOT’s Punguza Mizigo? Shocking revelations emerge as Baba confirms it all 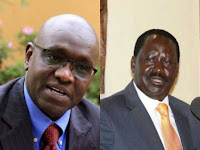 This is after the former Prime Minister on Thursday met members of County Assemblies Forum (CAF) and declared his support for the establishment of the ward as the centre of development.

Aukot has now said Raila's latest statement on the desire to make Wards the key development unit was the confirmation that he is unknowingly backing the Punguza Mizigo Bill.

In one of its provisions, the Punguza Mizigo Bill proposes the creation of the ward as the unit of development and has also called for the retention of all the current 1450 wards which will be used to accelerate development.

"A careful reading of the statement by Raila Odinga confirms that he has finally decided to support the #PunguzaMizigoBill2019. He raises concerns that are already addressed by Thirdway Alliance through the bill. Kudos Agwambo!" Aukot tweeted on Friday.

"The scion of the doyen of Opposition politics in Kenya has finally demonstrated magnanimity by noting the goodies brought by #PunguzaMizigoBill2019 to the ward level and the need to reduce the huge wage Bill. We welcome him to the pro-people campaign," Aukot added.

He further asked the ODM boss to ensure the Bill is approved in his home county of Siaya.

"We welcome baba, the enigma of Kenyan politics, Raila to the #PunguzaMizigoBill2019 campaign. It's good that you have finally seen the good in the bill. You can now advise Siaya County Assembly to debate and approve the Bill," he stated.

The Bill has been presented in 17 County Assemblies but only Uasin Gishu has officially approved it.