EKURU AUKOT’s Punguza Mizigo is a joke of the year and is going nowhere! Former IEBC CEO EZRA CHILOBA now declares as he supports RAILA’s BBI 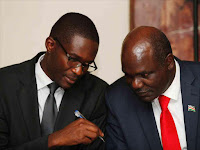 In an article published by Policy House (PH), Chiloba blasted the bill, stating that while it raised a few weighty issues, it was not well informed in terms of statistics and accuracy.

He claimed that the bill has been framed around the issue of reducing representation in Parliament, but it did not highlight how that would lower the cost of governance.

According to Chiloba, Aukot Bill is a means to stir public sympathy, but without necessarily recommending a way out of the social and political quagmire that Kenyans find themselves in.

He also attacked the provision that called for the reduction of constituencies from 290 to 47, stating that it did not give a formula of how the wards would be delimited.

In his argument, if the Punguza Mizigo bill sails through, then the number of wards would be reduced from 1,450 to 705, which he opined would negatively affect representation.

“The Punguza Mizigo initiative creates a blurry line on the mode of establishment and function of Kenya’s Senate and National Assembly. Without creating a distinction of the two seats from an electoral system design perspective, Punguza Mizigo renders the bicameral system weak,” Chiloba concluded.

The bill has so far been rejected in 4 of the 5 counties where it has been pitched, with the MCAs stating that they were awaiting the Building Bridges Initiative (BBI) report.