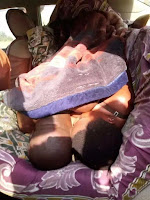 - A traditional healer was called to separate the two love birds after they got stuck It was a bitter sweet moment for an amorous man at a lodging in Mbale, Uganda when he got stuck while having fun with his lover. The middle-aged man is said to have checked into Tripple Zero Guest House to quench his thirst but he later found out that it was a big mistake when he was unable to withdraw his 'okufuaf' after strokes of happiness.

What was meant to be a memorable flight to Jerusalem in between the sheets turned to be a slide direct to hell as their escapade was laid bare in the public for all to see.

A local traditional healer was at hand to help them disentangle but it was not immediate as the two lovebirds had to endure long hours of shame still in combat, bundled on a mattress and covered in a blanket, as reported by Matooke Republic. Incidents of lascivious men and women getting stuck when cheating are not strange with such being reported across the country. Many are said to have been set up by their lovers after being suspected of cheating.