Did UHURU order RAILA to cancel his planned meeting with Mungiki at Chungwa House on Thursday? Things have begun to fall apart for Baba 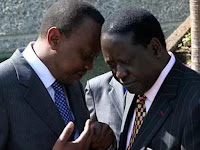 Reports had indicated that the delegation, which was to meet Odinga at Chungwa House on Thursday, September 26, had some members of the outlawed Mungiki sect.

On learning of the development, State House is said to have instructed Odinga's team to cancel the meeting on grounds that the Mungiki members would take the opportunity as an endorsement.

Etale termed the reports as propaganda asking the public to ignore them.

He further explained that he had given satisfactory reasons that led to the cancellation of the meeting revealing that Raila had other urgent engagements.

"Which Mungiki members are you talking about? Why fall prey to propaganda?"

"I think I explained in my dispatch to the media. Raila had other engagements that were urgent. Political meetings can always be rescheduled to another day," stated Etale.

"When a new date is set, we shall inform the media to cover it," he continued.

The meeting was scheduled to discuss various issues touching on matters of the national interest.