Boychild anaumia! Man beaten like a squirrel in a mall as the public watched, The boychild is under siege(VIDEO). 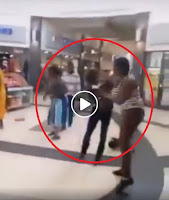 Tuesday, September 24, 2019-A man was embarrassed by his wife in public after they had a scuffle in a mall.

A video going rounds on social media shows the merciless woman raining kicks and blows on her helpless husband  as the public watched.

Cases of men being abused by their spouses have been on the rise.

Many men are suffering in silence in the hands of their abusive wives.

They are afraid to speak out on the abuse for fear of being ridiculed.

If this woman can beat up her husband like this in public, just imagine what happens at home.