Blow to RAILA as his own cousin, MIDIWO, finally ditches ODM and accuse him of being a dictator-RUTO is over the roof following the shocking news 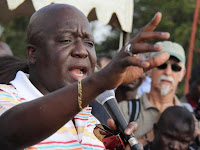 Speaking yesterday, the former National Assembly Minority Whip said that he has bad memories of the party.

He also confirmed that he has since decamped from the party founded and led by his cousin Raila Odinga.

“I have bad memories of ODM and I don’t want to speak about it. Sometimes it is wise to keep quiet once you walk out of someone’s house,” he revealed.

Midiwo opted out of the party immediately after losing the ODM ticket to Elisha Odhiambo ahead of the main race, with Elisha proceeding to beat him even as he run independently.

Also harbouring bad memories of the house is former Lagdera Member of Parliament Farah Maalim, who accused Raila of turning ODM into a dictatorial bloc after the party formation.

He said that while the party was very strong and ODM verse in its primary days, Raila soon developed intolerance, which saw others exit, himself joining the Wiper party.

“When we formed ODM, it was a national party represented by all tribes. Orange House was full of all Kenyans. But Raila became intolerant and told everybody who questioned him to leave. We left," added the ex-Garissa Town MP aspirant.

Maalim was the National Assembly Deputy Speaker during the 2008-2013 Grand Coalition Government period when ODM was still fresh after its formation in 2005.