Shock as it emerges that UHURU’s father, MZEE JOMO KENYATTA, was not a Kikuyu as we have foolishly believed all the years-He was born and exiled from this community for being too rude 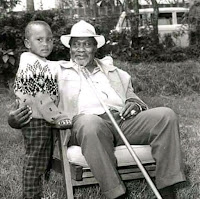 Wednesday August 28, 2019-A group of Kaya elders from Mijikenda community in the Coast have sensationally claimed that Mzee Jomo Kenyatta was not a member of Kikuyu community.

In tales based on their own origin, the elders claimed that the founding father was born to Digo parents before he was banished for being unruly.

Nobody knew exactly when he was born. Kenyatta himself, during his trial in 1952 on allegations of managing the Mau Mau, told the judge: “I do not know when I was born, what date, what month, or what year — but I think I am over 50.”

Led by Mzee Juma Mwachuphi, the elders claimed that the first president had roots in the coast, arguing that it informs his multiple trips to the region.

Despite their narrative, historical records however, indicate that Mzee Kenyatta was born to Muigai and Wambui, both from Kiambu in 1880s.

He was born Kamau wa Muigai before being baptised Johnson Kamau wa Ngengi. He went on to lead the country for 15 years from 1963.

Mzee Jomo Kenyatta died coincidentally in the coast at State House while he was attending to state functions. He was buried in Parliament.