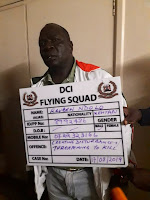 Wednesday August 21, 2019 - Former Makadara MP, Reuben Ndolo, admitted on Tuesday that he was broke and he was unable to raise the Sh 200,000 bail granted by a Makadara Magistrate’s Court.

Ndolo, who was arrested on Sunday for causing disturbance in Kilimani area of Nairobi, tried to beg money from Nairobi Governor Mike Sonko who he termed as his small brother.

Here is a conversation between Ndolo and Sonko on Sunday evening.

Sonko further lectured Ndolo by saying that all his friends have to learn that he now fights for ‘Wanjiku’.

“We can’t spend the day together, eat together as we fight for ‘Wanjiku’ from the city cartels and at the same time you go and break the law,” Sonko says.

However, sources said it is Sonko who bailed Ndolo out on Tuesday after he was abandoned by NASA leader, Raila Odinga, who is also his close friend.

Ndolo was Raila Odinga’s point man in Nairobi during the 2017 Presidential Elections.