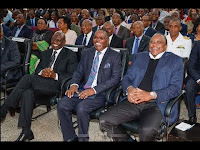 Sunday August 25, 2019 - President Uhuru Kenyatta has told gaming companies to adhere to the existing laws as they operate their businesses.

Speaking on Saturday after attending Citam's 60th anniversary celebrations at the church's Karen sanctuary, Uhuru said betting firms must pay tax if they want to continue with their operations in Kenya.

“In the capacity of Caesar, I will continue to say that so long as people continue to gamble, Caesar must get his share," Uhuru said.
"There is no reason for a few individuals to benefit from gaming companies who are claiming to sponsor athletes and sportsmen,” Uhuru added.

The President also added that Kenyans should take advantage of the country's diversity as a strength and not weakness.

The President concluded by asking Kenyans to ensure that they are counted during the census so that the Government can use accurate data in carrying out its development projects.

SportPesa and Betin owe the government Sh 61 billion in tax and the Government has maintained that they must pay the said tax in order to continue with their operations in Kenya.