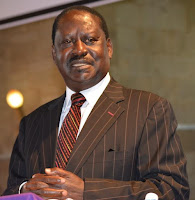 The popular singer died in a road accident Sunday night after his car rammed into a lorry along Thika road.

Taking to twitter, Raila hailed DeMathew as an artist who enlightened young people against illicit brews and educated his community on culture and current affairs.

“John Ng’ang’a Mwangi a.k.a John DeMathew did a great job as an artist. He enlightened young people against illicit brews while also educating his community on culture and current affairs. I wish his family and fans comfort during this trying time. May his soul rest in peace” his tweet read.

However, a section of his followers have accused him of sanitizing the late singer, who was among Kikuyu musician who used music to stir ethnic hatred during political campaigns.