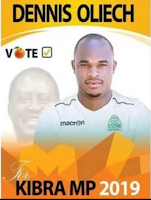 Wednesday, August 28, 2019- Veteran Kenyan footballer, Dennis Oliech, has been dealt a huge blow hours after he expressed interest in vying for the vacant Kibra Parliamentary seat.

This is after his immediate former employer, Gor Mahia, terminated his contract citing several cases of absenteeism, poor performance and his political ambition.

On Tuesday,Oliech, who is considered the best striker Kenya has produced yet, shared a campaign poster of himself in ODM colors hinting his intention to vie for the Kibra Parliamentary by-election slated for November 7.

The poster has a picture of Oliech donning a Gor Mahia jersey and that of a smiling opposition leader Raila Odinga in the background.


This, it seems, did not go down well with the club and they decided to terminate his contract with one year remaining.

A statement from the reigning Kenyan Champions read: “In pursuance of the provisions of Clause 6 of your Player Agreement Contract entered into with Gor Mahia Football Club we hereby write to advise you that we have terminated your contract with immediate effect.

“You have offered yourself as a candidate for popular political elections, a move that is likely to portray the club in bad light, cause disaffection among club’s supporters and fans, a step that is inconsistent with and inimical to your standing as the club’s football player.

“Further, you have posted a photograph of yourself in the social media donning the clubs jersey indicating your political intentions,”

Oliech joined Gor Mahia in February 2019, after being offered a monthly salary of Sh 350, 000 plus a Sh 3.5 million sign on fee which was to be paid in two installments.

He was used sparingly during his first season after he sustained an injury that saw him miss a large part of the campaign as Gor Mahia won their 18th Kenya Premier League title and reached the Group stages of CAF Championships.