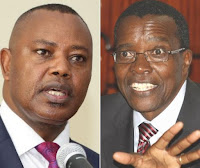 On Sunday, Kinoti flew to Mombasa where he met senior security leaders and briefed them over his visit.

During his visit, Kinoti managed to also meet Chief Justice, David Maraga who was also in Mombasa for a Judiciary function.

According to the source, Mr. Kinoti asked Maraga to put more pressure on the courts to deal with the corruption cases.

“The director arrived on Sunday. He met with the CJ on Monday before proceeding to the port,” a source said.

Mr Kinoti also met with Inspector-General of Police Hillary Mutyambai, who has been at the Coast to follow up on the intensified war on drugs, which has seen him reshuffle senior police officers in the region.