You can’t attack and insult UHURU and expect to go scot-free! See what is happening now to OSCAR SUDI after his rant on Wednesday? 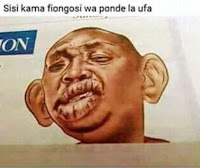 Saturday July 27, 2019-It appears the State has activated its machinery to deal ruthlessly with the outspoken MP Oscar Sudi following his diatribe against President Uhuru Kenyatta.

This is after it emerged that a document forgery case pitting the Kapseret lawmaker is set to proceed in October after the second term lawmaker failed to stop his prosecution.

The Ethics and Anti Corruption Commission (EACC) has been probing Sudi over claims of forging his academic papers, with his bids to stop his prosecution failing twice so far.

He was charged in October 2016 for forging his Independent Electoral and Boundaries Commission's (IEBC) clearance ahead of the 2013 polls, where he came to power.

His bid to stop his prosecution at the High and Appellate courts have both flopped, after also being charged for allegedly lying to EACC detectives during the nominations.

About his academic papers, IEBC suspects that he forged his Kenya Certificate of Secondary Education (KCSE) and a diploma in business studies at the Kenya Institute of Management.

Bernard Mulati who was the IEBC returning officer during the nominations testified about the matter saying he unknowingly cleared the MP, but realized the forgery later.

“He presented the papers at Kapseret Constituency where I was the returning officer and presented the High School and Diploma certificates for nominations. I assumed the certificates were authentic until much later when I realised they were forged,” Mulati said.

The case was on June 25th mentioned before Principal Magistrste Felix Kombo and is set to proceed on October 8 and 9.