WILLIAM RUTO should be very worried of PETER MUNYA! See what the CS did at Weston Hotel even as the DP’s murder plot hovers over his head? 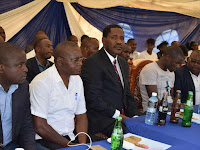 Monday July 8, 2019-Embattled Trade CS Peter Munya has vowed to continue holding meetings of Mt. Kenya leaders despite being a suspect in the plot to murder Deputy President William Ruto.

Speaking in Tigania East yesterday, Munya revealed that they have been having such meetings in various venues, including in Ruto’s Weston Hotel, and at no time did they plan to murder anyone, let alone Ruto.

"I first held a meeting with MPs and then called all ministers, parastatal heads and other Government officials, all totaling 45. We had met four times before the alleged assassination plot emerged," he was quoted as saying.

The CS further stated that they would not record statements until a formal complaint is filed by Ruto.

"We insist that we will meet again and again, not only at La Mada Hotel but elsewhere in Kenya because we have a right as Kenyans. We have not plotted to kill anyone but if he records a statement, we will go back to respond," he affirmed.