Why Governor MIKE SONKO wants DIAMOND’s unborn child with TANASHA named after him. 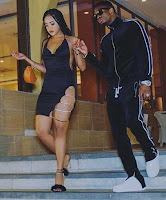 Over the weekend, the celebrity couple revealed that they are expecting a child in the next two months, during a lavish bash in Dar es Salaam.

Kenyan comedian, Eric Omondi, who was the emcee, took to Instagram to reveal that Diamond and Tanasha are expecting a baby boy which caught Sonko’s attention.

The flamboyant Nairobi County boss congratulated the high flying Bongo flava star and his girlfriend and requested them to name their baby after him if the delivery happens in Nairobi.

While this will be Tanasha’s first child, Diamond will be a father of four with three different women.