RUTO fears the truth like hell! See what he did to this blogger for stating the obvious truth? It is getting difficult dealing with DP nowadays 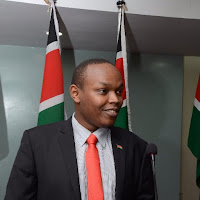 A blogger alleged to be allied to Jubilee, Polycarp Hinga, is one of the recent casualties after he told off the DP over claims against Tuju.

Ruto hit out at the party's secretary general over his new 'chief strategist' role for an Opposition party.

“So our democracy is so liberal that the SG of the ruling party has become the chief strategist of the opposition!! Maajabu,” the DP wrote on Twitter.

Hinga hilariously likened his response to that of Deputy President, saying that it was indeed liberal that he (Deputy President) could openly contradict and defy the President.

There have been claims by MPs drawn from 'Kieleweke' wing of Jubilee who have maintained that DP has been defying his boss.

In another tweet, Hinga slammed Ruto saying that he should not forget that Malindi MP Aisha Jumwa is working inside his camp despite being a member of ODM party.

"Ushasahau Aisha Jumwa of ODM is working deep inside your camp?" he posed in another tweet.

This is seen to be the reason behind Deputy President William Ruto's move to block the vocal blogger.