ESTHER ARUNGA gets second chance in life as she avoids jail in the murder of her 3-year old son. 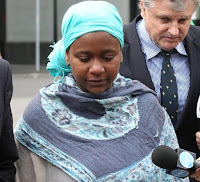 Thursday, July 18, 2019- Former KTN anchor, Esther Arunga, has been given a second chance in life after she was sentenced to just 10 months in the murder of her 3-year old son, in 2014.

Ms Arunga, who was arraigned in a Supreme Court in Brisbane, on was sentenced to 10 months in prison by Justice Martin Burns.


However, the 38-year old will not serve the 10 months in prison as she was immediately released on parole by Justice Martin Burns.

Arunga was charged for being an accessory to murder after she confessed that she lied to the police that her son died after falling down a staircase but it was later established that his death was as a result of blunt force trauma to his abdomen.

She later confessed that her husband Quincy Timberlake punched the boy and threw him against the wall 'while removing demons' from his body.

The prosecutor said that although Ms Arunga had not interfered with evidence, she had played a part in delaying the investigations and the arrest of the suspect.

Ms Arunga legal team told the court she had made a “voluntary correction” to police and her deception was due to “cultural factors” and attempts to protect her husband’s mental health.

This is huge reprieve for the once admired news anchor and is akin to a second chance in life and hopefully she will grab it with both hands.