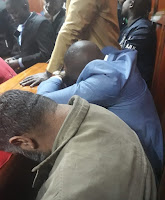 Jaguar, who once worked with AY in the hit-song ‘Navuka border’ kicked off a storm when he called for Kenyans to deport Tanzanians and Ugandans doing business in Nairobi.

His reckless remarks were met with fury from Tanzanian Government officials who sought an explanation from Kenya’s High Commissioner to Dar es Salam, Dan Kazungu.

“We wish to state that this is not the position of the Government of the Republic of Kenya, and we denounce the comments carried in the video in the strongest terms possible.”

While Jaguar has since been arrested and faces charges of ‘incitement to violence’, AY has urged him to humble himself and apologize to Tanzanians and the matter will be put to rest.

He is currently held at Kileleshwa Police Station waiting for the ruling on his bail application slated for Friday.