If you want land, UHURU is the man to contact-His family is dishing out land at a throw away price! See how much they are selling per acre? This is insane 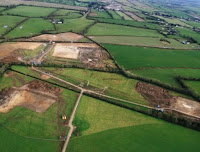 Saturday June 29, 2019-President Uhuru Kenyatta’s family is reportedly selling parts of their vast lands in Kiambu meant for Northland City to willing buyers at a throw away price.

According to reports, members of Kenyatta family are selling every acre for a mere Sh40 million compared to market prices which is about Sh70 to 100 million per acre.

The management of the Northland City, which is located in Ruiru, is selling the plots reserved for industries for them to inject funds on infrastructure development.

The entire city is estimated to be 103 acres and has been duly fenced by a perimeter wall.

“The entire 103-acre plot is now secured with a perimeter wall erected around it and soon each plot is now on sale as a serviced plot at Sh40 million.

"The same is also available for leasing where we shall put up purpose-built facilities for lease to incoming investors,” the paper quoted the city's business development head Paul Williamson.

Already, three developers, plastic products manufacturer and two agro-processors, have already acquired portions of the land and others are urged to pick up theirs fast before prices go up in future.

“We are urging international investors to buy plots here now before the dual carriageway is done since that will see demand rise forcing prices to shoot.”

“Our feasibility study shows processing and handling goods in bulk within a single facility makes its cheaper for retail outlets that require such savings to power their sales across Kenya,” Williamson added.