See what SABINA CHEGE has said over DP RUTO’s alleged assassination plot? This woman may kill the DP even before the real assassination 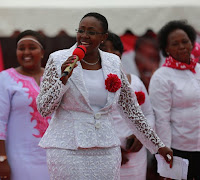 Speaking during an interview on Tuesday, Chege said the allegations are causing unnecessary tension in the country.

She insisted that no one wants the DP dead, noting that Ruto is just running away from the unknown.

“I think it was a false alarm and it was mismanaged.”

“These are some of the things bringing tension and unnecessary political discomfort in Kenya,” Chege said.

Chege noted that there is no reason to raise alarm when CSs meet to discuss matters of national interest.

She questioned whether the DP would be uncomfortable if his own allies held a meeting somewhere in town.

She urged Kenyans to remain calm pending investigations into the matter.

“Is it such a big deal if CSs or members from Mt. Kenya region meet?”

“This is just politics!”

“I know there are people who meet at Weston Hotel, but I do not think anyone has been suspicious of their plotting against anyone’s assassination,” she said.