Mr SEED’s Kikuyu wife, NIMO, almost collapses after finding out that the singer has a secret baby mama in Mombasa called SONIA 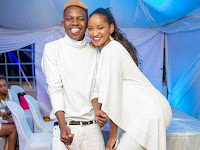 Tuesday, June 25, 2019 - Gospel singer, Mr Seed, has been caught up in a shameful scandal after a lady alleged that he forcefully had sex with her in his friend’s house in the absence of his wife, Nimo, who recently gave birth.

Although there is an audio recording to back up these claims, the singer has been rubbishing the rumour and blaming his once good friends, Bahati and Weezdom, for tarnishing his name.

But Weezdom has told Mr Seed to carry his own cross and spilt even more dirt on him.

While appearing in an interview with Citizen Radio’s Mzazi Willy M Tuva, Weezdom, who is a struggling gospel artist and childhood friend of Mr Seed, said that Seed has a secret baby mama in Mombasa called Sonia.

This has shocked Mr Seed’s wife, Nimo, forcing her to deactivate her social media accounts and go into hiding.

Seed and Nimo have been married for less than 3 months.

They previously lived separately as girlfriend and boyfriend.

The young man cried like a baby during the interview, LOL!!