How PASSARIS and fellow MPs avoided a major plane disaster yesterday? You won’t believe what happened to the plane they had boarded 6 minutes after takeoff? 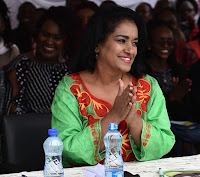 Friday June 14, 2019 - Nairobi Woman Representative, Esther Passaris, is counting herself lucky after a plane she had boarded yesterday evening aborted shortly after takeoff due to a technical hitch.

The Kenya Airways flight from Mombasa was scheduled to land at the Jomo Kenyatta International Airport (JKIA) but that didn’t happened.

In an update to her followers, the female MP congratulated the pilot for the quick response that averted a major plane crash.

Passaris was in the company if other women MPs onboard the KQ plane.

"Grateful to God for journey mercies.”

“Our Kenya Airways flight from Mombasa en-route to JKIA was cut short six minutes after take-off due to a technical failure.”

"Kudos to the pilot for making a good call," she tweeted.

The Woman Rep was also expected to fly to Murang'a on Friday for a mega Embrace Women rally.