Here are RUTO’s only options ahead of 2022 after UHURU’s outburst against him last Sunday and his Tanga Tanga team - He has no choice but to... 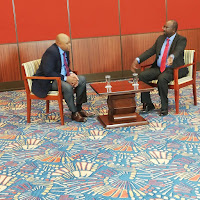 Speaking during an interview on KTN's Point Blank show, the renowned professor observed that the DP is standing on shaky grounds with regards to his presidential bid, and will have to redeem himself if he is to triumph.

He said that the DP has failed to offer himself as the best option as of now and will have to overcome his current isolation and make himself appear like a credible leader.

According to Kagwanja, Ruto has two options if he is to realise his ambitions; resign as President Uhuru Kenyatta’s deputy or embark on a campaign to embrace his political rivals ahead of 2022.

He advised the DP to make peace with Uhuru, who he said is already having many problems with him.

“They have crossed the Rubicon with their armies and Rome is not safe.”

“Ruto either resigns or works out a handshake that leaves him credible in the face of Kenyans," he said.

Kagwanja added that Ruto should also forget about realising his ambitions should he fail to gain national backing and rally the entire nation behind him.

"The reality of the matter is...the best case scenario I can see for Ruto in 2002, is the Uhuru factor.”

“Whether he gets the support or not you cannot win the vote the way Uhuru won, the way Kibaki won in 2002, without the total support of all Kenyans," he added.