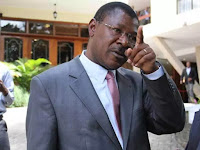 Thursday June 20, 2019 - Bungoma Senator, Moses Wetangula, has decried “the sorry state” of the health sector in the country.
Speaking at the Senate on Wednesday, Wetangula said most public health facilities across the country lack medicine, including those used to treat malaria and waterborne diseases.

Wetang’ula said provision of health services in public institutions seven years after devolution is wanting and has contributed to many deaths due to negligence by health practitioners.

The Senator who is also the Ford Kenya party leader faulted some health officials for operating private facilities at the expense of public institutions.

“Doctors should choose between working for the Government or private practice.”

“It’s not going to be practical to put one foot in Government institutions and the other in a private institution,” he said.

Wetangula concluded by urging President Uhuru Kenyatta to sack Health CS , Sicily Kariuki, because she has failed to show leadership in the health sector.