Fireworks as PURIRTY NGIRICI calls UHURU a beggar and says she will continue campaigning for RUTO in 2022, UHURU never helped me to win the seat 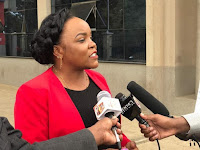 Tuesday June 18, 2019 - Kirinyaga Women Representative, Purity Ngirici, has joined other Mt Kenya leaders in condemning President Uhuru Kenyatta for claiming that he helped them win their seats in the 2017 General Elections.

Speaking on Monday, Ngirici said that it is the MPs who helped the President win and not the other way.

Ngirici said instead, it is the President who had turned against the very people he begged for support when the Supreme Court overturned his August 2017 victory.

“The President did not help us, instead we helped him.”

“We respect him as the President but he should also listen to us.”

“When his election was nullified, he was always calling us.”

“Why did he not go campaigning alone?” Ngirici asked.

Ngirici, who is also the chairperson of Kenya Women Parliamentary Association, said as long as the people of Kirinyaga are not complaining about her performance, she will continue “teaming up with other like-minded Kenyans”.

“I was elected as a political leader and if my people are not complaining, why is the President complaining?”

“We want to see him launching development projects in Mt Kenya.”

The outspoken lawmaker accused Uhuru of double standards saying he has never castigated the Kieleweke group, an amorphous team campaigning against the election of Ruto as President in 2022.

"It's only that they [Kieleweke] do not seem to have a candidate but they are also campaigning.”

“They are all over abusing the DP, the principal assistant of the President and they do not see that as a problem,” she said.