DRAMA as SLAY QUEENS fight over a SPONSOR in a supermarket, Here’s the must watch VIDEO. 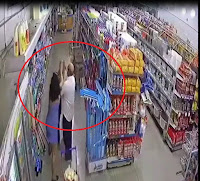 Sunday, June 23, 2019-These slay queens exchanged kicks and blows when fighting over a sponsor.

The sponsor had taken one of the slay queens for shopping in a supermarket before the other slay queen emerged from the blues and started creating drama.

She was probably following them after realizing that her territory was being invaded.

The two slay queens engaged in a cat fight as the sponsor  walked away like a boss, leaving them fighting.

It took the intervention of other shoppers to stop the fight before things turned ugly.