Sunday June 16, 2019-The British Government, through its Embassy in Kenya, has distanced itself from a document that has been making rounds on social media about Deputy Chief Justice Philomena Mwilu being denied a visa to the UK.

The Embassy noted that the entire document was fake and that the DCJ was not barred from getting a visit visa to the UK.

The same was communicated through a short statement sent by the Embassy on Twitter.

"We are aware of a document circulating entitled ‘Refusal of a Visit Visa’ claiming to be from UK Visas & Immigration, addressed to Philomena Mbete Mwilu - please note, this document is FAKE," read part of the statement from the UK embassy. 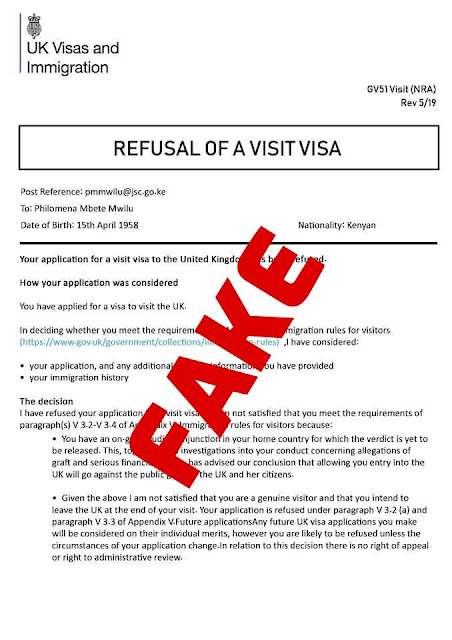 The fake letter had outlined the reason why the DCJ could not visit the UK as having not satisfied all the requirements of visitors according to the immigration clause of the UK constitution.

It indicated that Mwilu had an on-going judicial injunction and that investigation into her conduct concerning allegations of graft and serious financial crimes was still ongoing.

"I have refused your application for a visit visa as I am not satisfied that you meet the requirements....of immigration rules for visitors," claimed the letter.