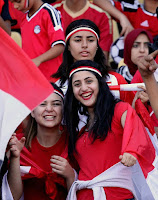 Friday, June 21, 2019 - The highly anticipated 2019 African Cup of Nations gets up and running tonight as hosts Egypt face off with Zimbabwe at Cairo International Stadium.

The Pharaohs won the AFCON the last time the competition was held on home soil in 2006, marking the start of three successive triumphs as they became the most successful side on the continent. Go here>>>

With Mohamed Salah, who won the Champions League with Liverpool last month in their ranks, the home nation have been backed to go all the way and lift the trophy for a record eighth time.

Egypt have won their last four meetings with Zimbabwe and netted more than once in each of those matches. Go here>>>

On home soil, the Pharaohs have never tasted defeat to this week's opponents and they have conceded just one goal across four-such fixtures.

As for Zimbabwe, they are sweating on the fitness of star player Khama Billiat, who plies his trade with South African giants, Kaizer Chiefs. Go here>>>

Elsewhere, Nottingham Forest ace Tendayi Darikwa is in line to retain his place.