Shock as COTU Boss FRANCIS ATWOLI declares all his wealth, wives and children live on TV-This is what he owns 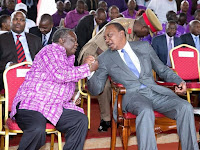 Wednesday May 15, 2019-Central Organization of Trade Unions (COTU) Secretary General Francis Atwoli has finally come clean about his net worth.

Speaking on NTV's Side Bar, Atwoli revealed that he owned a number of vehicles and domestic animals spread out in two counties.

He further revealed that he possesses only two bank accounts where all his money is and that he is open to investigations because he knows that all his wealth was acquired legally.

He also revealed the number of wives and children that he has so far.

"I have told people currently I have two wives. I have 15 ordinary cows in Khwisero (Kakamega County). In Maasai land, I have 11 cows.”

"I have 17 children. I have a Mercedes Benz and a Prado. You can go to Toyota and see how I acquired them," Atwoli stated.