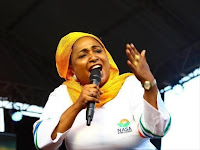 Speaking on Tuesday, Mboko said Raila Odinga can destroy Ruto and his orphans in seconds if they continue mocking him.

In reference to Rashid Echesa's predicament, Mboko told Ruto’s lieutenants to learn from what befell the former Sports CS after he abused the aging opposition leader.

“Some people have been going around cry foul that Raila is breaking Jubilee, he's destroying Uhuru's friendship with Ruto and so on.”

“But if you provoke him, his wrath will catch up with you.”

“Uhuru was not stupid to work with Mr Odinga," Mboko stated.

Over the last one year, Ruto and his lieutenants have often accused Raila of allegedly instigating the infighting within Jubilee Party.

They have also pointed at Mr Odinga’s poor record of breaking parties, a claim that President Uhuru Kenyatta denied.