RAILA can forget about becoming President in 2022! See who has just died and evaporated his hopes of ever setting foot in State House? 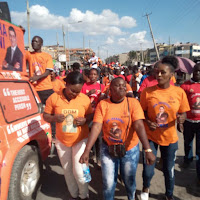 Wednesday May 1, 2019-Former Prime Minister Raila Odinga and his ODM party are in mourning over the loss of one of their stalwarts.

He's credited for transformation of the party's fortunes in Ikolomani and Kakamega County at large.

In a statement through official Twitter handle, the party described him we a loyal member who contributed immensely to the growth of the party in the country.

"We mourn the passing on of Mr. Fred Munzala who until his untimely death yesterday was the Party Acting Chairman, Ikolomani Branch in Kakamega County. We have lost a loyal member of the party & a man who contributed immensely to the growth of the party in Ikolomani. May he RIP," read the statement.

His death is a big blow to Raila who is eyeing the Presidency in 2022.