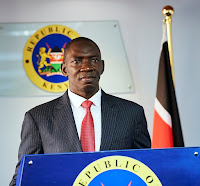 Tuesday May 7, 2019-National Super Alliance (NASA) leader, Raila Odinga, is continuing to enjoy the fruits of his handshake with President Uhuru Kenyatta after his man was named official government spokesman.

In an announcement made by Information Cabinet Secretary, Joe Mucheru on Tuesday, Rtd Colonel, Cyrus Oguna was named as the government spokesman.

Eric Kiraithe, who is a former Government spokesman was sacked and his place taken by Oguna.

"In line with directions from the Executive Office of the President through the Head of the Public Service, the office of the Government Spokesman shall be domiciled at the ICT Ministry," the statement read.
Oguna shall now have the oversight role of all government communication channels under the ICT Ministry.

These include; Directorate of Information and all county and sub county information officers, Department of Public Information, National Government Communication Centre and the Government Media centre.
He will also have a content oversight role over the government news gathering and dissemination channels - KNA and MyGov.
Oguna, who is a close ally of NASA leader, Raila Odinga is currently pursuing a Master’s Degree in International Communication.
The Kenyan DAILY POST